Back in about 2010/11 I was asked to guide a runner attempting qualification for the London Olympics. We started with 1-2 runs per week in the Regional Sports Centre, Waterford and a couple of local races; she had a coach so I was only helping. The one thing that stood out for me at the time was how hard it was for her to complete a run session. A lot of organisation was needed to arrange times to suit both the guide and athlete and complete the training plan. I ran with her in Santry Stadium for the qualification attempt for London, she was unsuccessful that time around.

About the same time Damien Vereker who is visually impaired, was starting out cycling. He had been out on a tandem that the Comeragh Cycling Club owned. I was contacted asking would I go to a race with him and pilot the bike. This event was in Blarney where we went and won the tandem section that day, the excitement and disbelief when he found out he had won was incredible. When we went up for the prize I had to describe to him what the prize looked like.

Again, as he is visually impaired he is dependent on having a tandem bike for training and a pilot to cycle with him. From here I started to work with Damien, coming from being a leisure cyclist he quickly progressed over the next 12 months. I worked on getting his fitness up; he lost extra weight and by 2013 was awarded the most improved rider that year. This took a lot of effort on both our parts but the hard work paid off. Next, we needed to change equipment and try to improve things again. We held a spinathon in City Square, followed it with a night in the Mansion House and along with some company sponsorship we raised enough money to purchase a new bike. The cost of the bike was about €9,000.

In 2014 we won the Invacare League in Ireland and travelled to race abroad getting some valuable international experience. To fund the 2015 racing season, I organised a sponsored cycle on December 28th 2014 where we cycled from Malin Head to Waterford on the tandem in 13hrs. We had a relay of 5 groups of 2 to keep the tandem going all the time to complete the journey as quick as possible. The plan was to do it in 12hrs but the weather was bad with snow and ice on the road with temp dropping to -4 on the day. We competed in Belgium, Germany, Spain and Prague; however during the season I realised we needed a new pilot for the bike so I stepped down and recruited a new Pilot. They came in 3rd position in Prague which was a massive result.

Onto 2016, a new bike and travel costs have been fund raised for at a great night in Kilcohan Park Greyhound Stadium which had local hurlers, cyclists and runners racing around the dog track.

Damien was selected to go to the Paralympic Games in Rio 2016. Find out how he got on!

There are so many other people out there that are in similar position who don’t have this opportunity. This is not all about the Olympics but giving people the opportunity to take part in sport and get some guidance with training. The cost of equipment is expensive and athletes are dependent on the expertise of the clubs they approach. Once you reach a good standard there is some help but how do you get to that position?

If you can help we are always on the look out for Pilots and sponsorship to maintain and purchase parts and equipment. 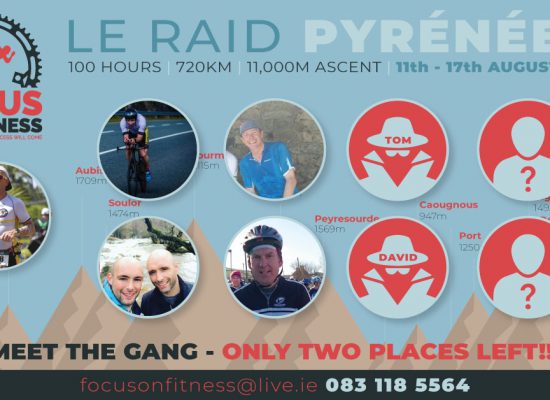 We are getting closer to Le Raid Pyrénéen cycle trip 2019, so we thought now would be a nice time to introduce you to the people coming along with Focus on Fitness. We are so excited, especially after the success of the Lanzarote triathlon trip last month. So far, we have 6 people on the trip, with 2 remaining spots... are you tempted?

It is around this time of year that I always get asked for tips for the upcoming triathlon season. I have compiled a few of my top tips to get you to your race, and meet your goals successfully. Whether you are triathlon training, or just trying to improve your fitness, these tips will help you stay on track.